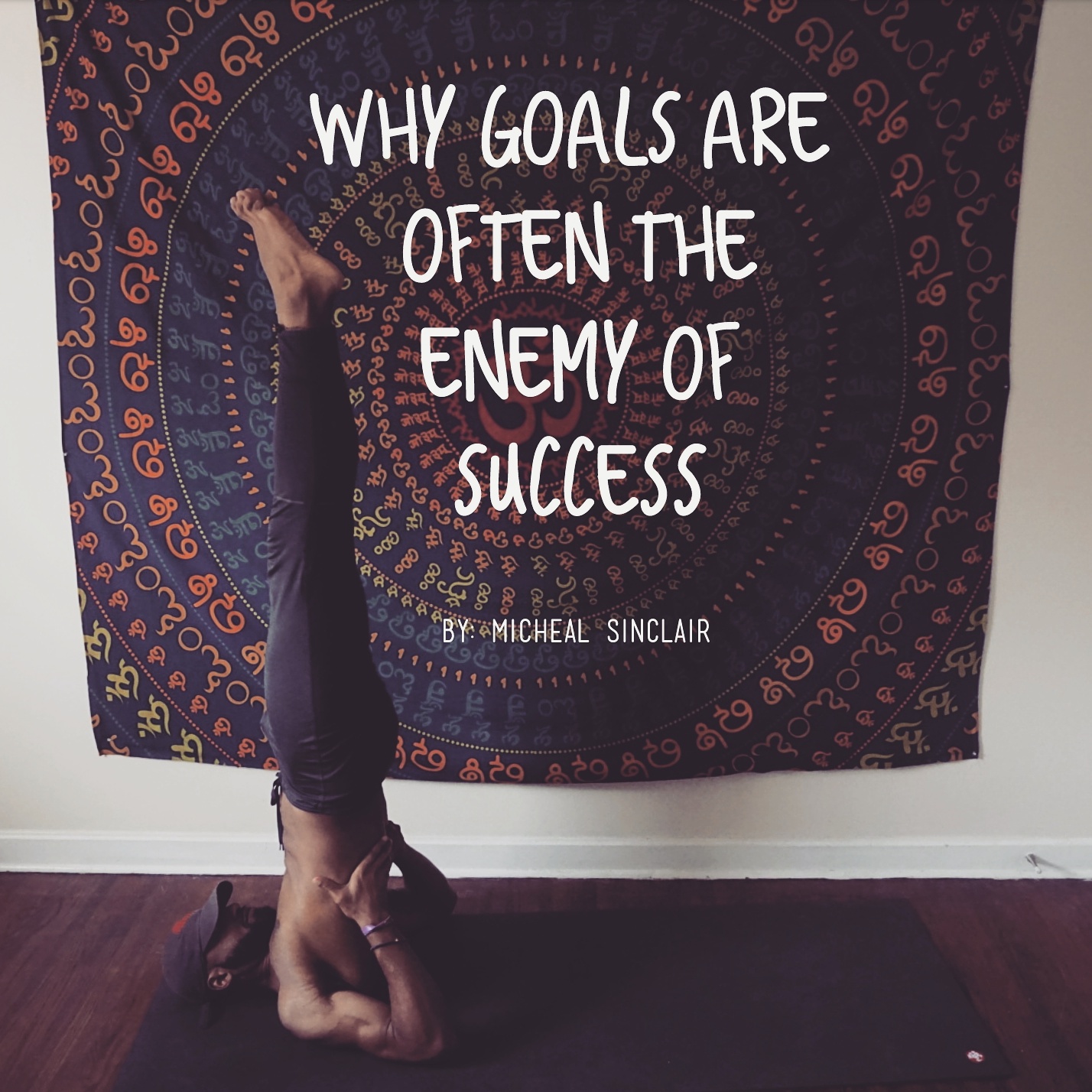 Why Goals are often the Enemy of Success

Can a person be successful if they’re constantly anxious and unhappy? I don’t think so but a lot of the people we label as “successful” are miserable from moment to moment and a part of that misery comes from being anxious about achieving or not achieving goals or success. There are many reasons why success brings pain but I think the largest of these is that every time you accomplish a goal, you give yourself something else to worry about. Have a new child and congratulations, you’re responsible for an entire human being for the rest of your life. Make a new piece of artwork and now you have to worry about what other people will think about it.  Get a new promotion at work and now you have to worry about performing up to par. Start your own business and now you worry about whether or not the business will be successful. Goals give you something to shoot for but they also give you something to miss. Goals give you something to gain but they also give you something to lose.  For a long time, I placed my success in a later date and I had rigid goals that I needed to achieve in order to feel successful. I’d been programmed into believing that I had to have goals and that I had to be constantly working to achieve them or I’d never be successful but is this really true? Over the past few years I’ve forfeited my need for goals and I’ve become happier because of it. I’ve learned that setting goals can be a trap that often leads you to more pain than relief because goals are set in the future which doesn’t exist. I’ve learned that most people are unhappy or dissatisfied with life because they’ve set goals for themselves that they can’t achieve and since they placed their worth in those goals, not achieving them really affects their self-esteem. Goals are an attempt to hit a moving target blindfolded because none of us can see what tomorrow holds and things are always changing. We assume — we make very calculated guesses about what might happen but we have no idea what the next 5 years or even what the next 5 hours hold in store for us. Acknowledging this truth led me to adopt a growth based mindset instead of a goal-oriented one. This truth inspired my obsession with getting better and revealed to me that my only opponent is the person that I see when I look in the mirror. These days I have but one true goal and that’s being better than the person I was yesterday; a task that has proven itself to be ambitious enough to keep me busy for the next few lifetimes.

When I was 18, I thought I’d be married with kids by 25. Having a son was honestly my biggest dream. This goal was so important to me that I used to legitimately fear the possibility that I wouldn’t have a son. All of my grandmother’s children are girls, all of her grandchildren are boys, and all of her great-grans are girls so if the pattern continues, I’ll only have daughters. But I didn’t want a daughter because it didn’t fit the narrative that I was writing for myself. I needed to have a son because I didn’t have a father around growing up and so to justify that pain, I needed to have a boy and give him everything that I felt like I missed. I wanted to “do it right”. I couldn’t wait to name my son Micheal Sinclair Irby II and leave my legacy on this earth. I thought that if I didn’t have a son of my own to love and teach, then the pain I experienced in my childhood would be in vain. I wasn’t aware of it at the time but this goal is what led me to gravitate towards toxic romantic relationships. I think because I’d missed out on the two parent household life growing up, I was constantly subconsciously looking for something or someone to fill that void. The problem is, no one besides me would ever be able to fill that void but since I didn’t realize this, I tried to fit many square shaped women into a round hole. It honestly wasn’t from lack of trying but I’m so grateful to report to you that at 26, I still don’t have any kids (that I know of). Not only do I not have kids but these days, I’m not even sure that I still want to have kids. I think kids are amazing — the most wise, kind, and loving members of our society by far. I also think that children are a blessing and that it’s the dopest work of art that two people could possibly create together.  But I’m not sure that I want to be responsible for one. I’ve learned that I’m still a kid myself. I’m still trying to figure out what the hell I’m doing in this place. I still have a ton of questions about my existence and a ton of exploring to do and I feel like having a kid, at least anytime soon, would limit my experience. I understand that for a lot of us, having a child is a major life goal and that’s certainly confirmed if you just log onto Facebook for a while. And having a child is a major success! But for me, having a child was also a very selfish desire and this was made apparent to me when I realized that I wanted a son wayyyy more than I wanted a daughter. And the real reason that I wanted a son was just to spite my father. To show him that not only was I more successful than him in general but also a better parent. My goal of being a father was superficial and I’m 100% sure that by fulfilling that goal, I would have suffered, my partner would have suffered, and the child would have suffered. Had I gotten someone pregnant, I would not be doing the things that I’m doing right now. I wouldn’t have the freedom to do what I want at a moment’s notice and to me, that flexibility is a key part of my success.

I’ve learned that comparison kills a lot more things than just creativity. Comparison is the thief of happiness and it ruins relationships and self-esteem. Unfortunately, most of us set our goals by comparing where we are to where we want to be or by comparing what we have to what someone else has. We see that another person is doing what we want to be doing so we assume that we need to achieve the same goals as that person or we’ll never be successful like them. On Twitter you often see the hashtags #relationshipgoals, #friendshipgoals, or #careergoals along with a photo of a person or people that appear to be happy.  But comparing yourself or your journey to someone else is not only a surefire way to make yourself discouraged, it’s also downright silly. Everyone comes into this world alone. Everyone has a unique set of experiences in a unique set of circumstances that shape us to be very unique people. But for whatever reason, we’d rather sacrifice our uniqueness and conform to what’s popular at the moment because we assume that popularity equals love. We assume that popularity equals value so when we see something that appears to be valuable, we compare ourselves to it and often attempt to become more like it instead of more like ourselves. The saddest part about it all is that you’ll always fail when attempting to be like someone else. You’ll always fail at your goals if your goals are rooted in becoming more like someone else because you’re trying to clone an output without having all of the same inputs. Even if you succeeded at duplicating the success of someone else, you’d still be just that — a duplicate. A copy-cat. A replica with substantially less value than the original. Why sacrifice everything that makes you a unique expression of your creator in order to become like someone else? You literally cannot be successful unless you’re being yourself and the best way to be yourself is to not have goals at all. Instead focus on growing. Focus on learning about yourself and why you do the things that you do. Focus on learning about what you really want to get out of life. Focus on getting better in every aspect of your day to day life and you’ll start to find that goals are unnecessary. Goals are inherently terminal. They have an ending and what will you do after that ending has come? What will you do once you’ve accomplished all of your goals — do you stop there? Do you win the game of life once you’ve accomplished all the things? Of course you don’t and of course life doesn’t stop when you get what you want and that’s why you should always want to improve yourself beyond achieving temporary goals.

Diamonds are valuable because they’re relatively rare and take time to cultivate. But guess what’s even more rare than a diamond? YOU! Scientists estimate the probability of your being born is 1 in 400 trillion and of all the earth’s gems, diamonds are actually the most common. So even comparing yourself to a diamond is selling yourself short. Attempting to be anything other than the best version of yourself is a disservice to yourself and to the world at large. Human beings are insecure and this insecurity leads us to idolize those that seem to have it together. I think goals are the direct result of this insecurity and I don’t think they are necessary to achieve a fulfilling life. Bowhead whales have a life expectancy that’s over 200 years on average and I’m sure that not one day of those 200 years is wasted on setting goals. I know it doesn’t seem like it, but it’s totally possible to live your life one day at a time without constantly having to focus on some point in the future when you’ll achieve something. You don’t have to spend your life worrying about accomplishing goals that you have imposed on yourself or have been imposed on you by society. You don’t have to compare your life and what you’re doing to what someone else is doing and you don’t have to constantly be accomplishing things for your life to have value. Your mere existence is a success so if you really want to be successful than just live! Take risks, ask questions, put yourself out there and shift your focus from being better than everyone else to instead just being better than yourself. The only goal worth having is to live life to the fullest extent and to learn as much about yourself as you possibly can. Do those two things and I guarantee that you will live a very successful life!

Playing Victim is Playing Yourself
February 21, 2017