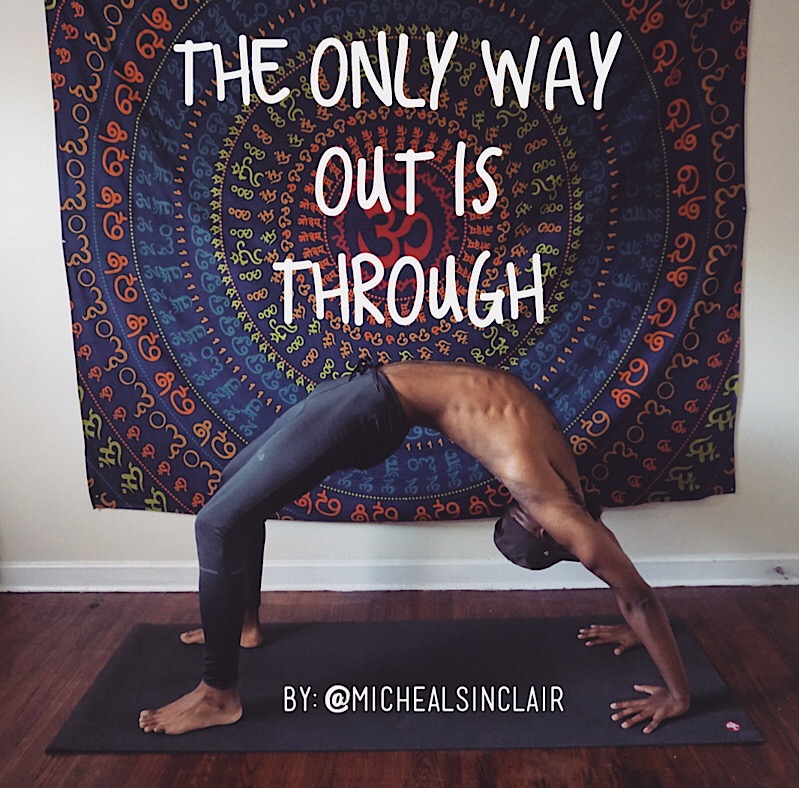 The Only Way Out Is Through

Spring 2013 was a very confusing time in my life. Well, most of the time I’ve spent living has been confusing but that’s not the point. In spring of 2013, I’d just gotten out of the longest relationship I’d ever been in (a whopping year and a half lol), I’d just quit my “dream job” in Boston and moved back in with my mom in hodunk Laurens, SC, and I was using my Sports and Entertainment Management degree to it’s fullest as a teller at the local credit union. I felt so lost. I was literally having breakdowns on what seemed like a daily basis because I was so discontent with my life. I left college feeling like a big shot and not even a year later I felt like a failure more than anything else. All I did with my life was go to work and pander to ungrateful people for 8 hours and then come home and mope about it. I was constantly looking for an escape route so I spent a lot of my free time looking for jobs in big cities. I still thought that I was a model back then and one day, I was on craigslist looking for modeling gigs and I came across this ad that I felt like described what I am and what I was looking for to the letter. Further investigation revealed to me that the poster was Truth, the brand behind all of the anti-tobacco commercials. Apparently, Truth goes on tour ever summer with Warped Tour to basically tell kids that “smoking is bad mmkay?” If my memory serves me correctly, they tour for five months and the “truth riders” live on a tour bus that goes city to city spreading the word. This sounded like my dream job. I’d always been enchanted by the tour life from my love of music and even though I didn’t make a ton of music back then, I’d always had dreams of making it as a musician so this seemed like the next best thing. Not to mention all of the opportunities that could have come out of it. To apply, you had to make video of yourself and post it on Youtube. I’d never done that before but I figured, “what do I have to lose?” I’m 22, living in my mothers house in middle of nowhere, SC and worse case scenario, they just don’t show interest. So I made the video. And I sent it in. And the next week, I got a call.

There’s not a word in the english dictionary that would properly describe just how excited I was after I got that call! Not only was this an opportunity to work with a major brand doing something that I love but it was also my ticket out of my moms house which really meant it was a ticket to no longer having to feel like a loser everyday. They liked my video and I couldn’t believe it. This was the first video I’d ever shot and edited and I recorded it all on my Samsung Galaxy S3. I was still low-key creatively back then so I wasn’t sure how it would be received or if they would think it or I was good but apparently, I piqued someone’s interest. A couple phone interviews later and I was on a plane to JFK to do the final round of interviews in Manhattan. This was it. This is how I would make it out… or so I thought.

New York was just as magical as it always is. My line brother graciously agreed to let me crash on the floor in his crib for a week and I had three days of interviews between me and my dream. The setup was a lot like what you see on MTV reality shows. I want to say maybe 20 people were invited to New York and people were getting cut everyday after the interviews. On the first day, I did my first interview and met a lot of the veteran truth riders. They all seemed to like me, a lot, and I did pretty well in my first interview. That evening, all of the applicants got together at this bar for drink while everyone anxiously waited by their phones to hear whether or not they made it to the next round. I remember that there were like 3 or 4 people that got the call before me. 2 of them got yeses but they others didn’t so I really had no way of guessing what would be on the other end of my call. Eventually, it was my turn. I walked outside to answer the phone and was delighted to hear that I’d made it to the next round! I walked back in the bar feeling accomplished. Feeling certain. The next day was the last day of interviews and it was the most intense. It was a full day of unorthodox Truth try-outs where we did a number of things ranging from this charades type of personality test to going out on the street in Manhattan and trying to get strangers to talk to us or dance and be silly. This went on for like 8 hours or so and then they sent us home to wait for the results. I was still pretty confident at this point. Most of my peers had expressed to me that they liked me and thought that I’d make it for sure and I’d also became friends with a couple of the tour veterans who also seemed to imply that I had a spot or at least to my ego their words felt like implications. The call came at like 10pm that night. I was sick with anxiety and was honestly relieved to see a call come in. I answered and the voice on the other end of the phone had a tone that I was familiar with from the dozens of other jobs I had applied to months before. I didn’t make it.

The best way I can describe what I was feeling is the Mister Krabs meme. The pervading emotion that I felt was confusion because I was so sure that this was it. I was so sure that I was a perfect fit. I was so sure that this was going to be my ticket out of monotony, boredom, and discontent. But strangely, unlike all the other times I’d gotten my heart broken before, I didn’t cry. I just felt really, really sober. Heartbroken, for sure, but unconvinced that it was because I was inadequate. I called one of the truth veterans that I had gotten cool with for a little insight on why I got denied. I don’t remember exactly what he said to me but it was something along the lines of “it doesn’t matter how dope you are, there will always be somebody that can’t see it.” Those words brought me peace in a weird way. I was still hurt, for sure, but I also felt a little empowered. My LB took me out for a night on the town where I pretty much successfully forgot about it all with the help of a lot of liquor. I missed my flight the next morning, to add insult to injury, AND I left my lights on when I parked at the airport, so I came back to a dead battery, but I eventually made it back to my momma’s house in hodunk Laurens, SC. Still full of pain but also full of something I didn’t have before I left which was determination to not let what was happening to me define my worth.

A couple weeks later I drove myself to a tattoo shop in Greenville, SC and I decided that I was finally going to pull the trigger on getting a tattoo. I’d done some research and I chose the Koi fish because in Japanese/Chinese mythology, the Koi fish has to swim upstream against strong currents for years and years and years in order to reach this waterfall called “Dragon’s Gate”. If he perseveres long enough, he’ll eventually pass through the waterfall and will be rewarded by becoming an all powerful dragon. I felt like there was no better representation of the experience I’d just been through and other experiences that brought me to that point. My entire life it felt like I was swimming against the current, facing obstacle after obstacle, and there were many times that I wanted to give up. There were many times when the heartbreak felt so painful that I felt like I couldn’t go on anymore. But what I’ve learned is that heartbreak provides us with an opportunity and one of the highest opportunities that this existence can provide. Each time our heart breaks we have the choice to either fill in the cracks with cement and build these walls to try and make it harder for us to get hurt again. Or we can allow the heart break to open our hearts a little bit. We can allow that pain to reconnect us to our humanity and to our purpose. We can allow the pain of heartbreak to make us soft again. Vulnerable. Sensitive to the beauty of life and the beauty of pain. We can allow the pain to make us cold and withdrawn or we can use it to inspire us to keep going. I don’t know much about this life that we’re living but I know that there’s no way to escape it. I pity my friends who have chosen suicide, not because I think that it’s shameful because I don’t and there have certainly been days that I didn’t feel like living anymore. But because I know that they are just delaying the inevitable. Life is a curriculum. Lessons will keep appearing over and over again until they are learned. You can try your best to avoid the pain of heartbreak by going under it or going around it but you better believe that it will only cause the pain to appear again in another form. You can travel all around the world in an attempt to escape what you’re feeling inside but you’ll soon find that what’s really bothering you isn’t geographically based; it’s inside you. Instead of trying to escape, I encourage you to be brave and face whatever it is that you’re dealing with right now because you are strong enough to handle it and you will be better because of it.

The only way out is through.

Playing Victim is Playing Yourself
February 21, 2017