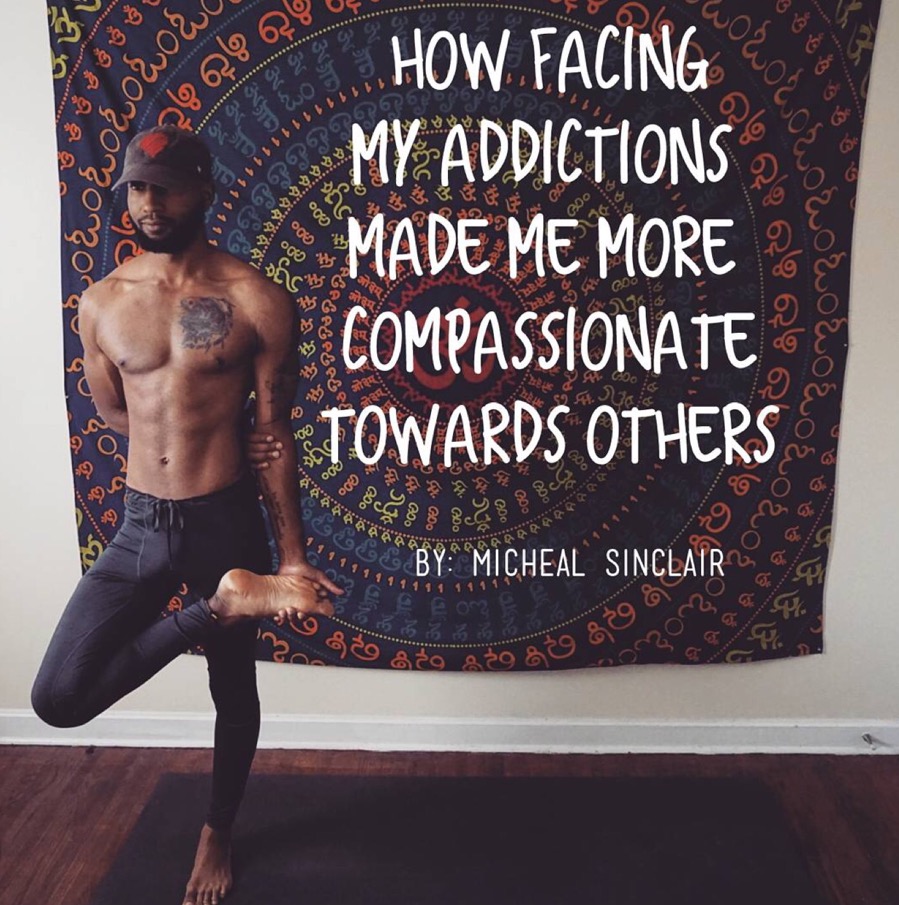 “How Facing My Addictions Made Me More Compassionate Toward Others”

We’re all addicts. And the crazy part about it is that we’re all addicted to the same thing. We’re all addicted to feelings of pleasure, something that we unfortunately mistake for happiness. It used to be so easy for me to judge people that I thought were overweight because I thought that I knew why they were overweight. I thought that they just didn’t have any self-control or enough self-discipline to exercise and that’s ultimately why they gained weight. I’ve since learned a number of things about food and how it affects our weight providing me with an understanding that gaining weight is not as simple as just overeating. I’ve learned that I was ignorant in my most of my assumptions about overweight people but the most important thing that I’ve learned is that for most of us, myself included, eating is an addiction. The reason eating is a addictive is the same reason any other thing can become addictive — it makes us feel good when we don’t feel good. It’s really as simple as that. When I told my roommate at the time about my mother’s diagnosis, he bought me two 8packs of Reese’s Cups to show his condolences because he knew they were my favorite. I remember eating all 16 of them in less than an hour and I think that was the first glimpse I had into seeing that I’m an emotional eater. I couldn’t see it growing up because yes, I’ve been pretty slim my entire life and yes, I do have a pretty fast metabolism; but I also have been pretty physically active my entire life too. I think those things kinda hid from me that I frequently turned to food all throughout my life for comfort when I was stressed out. If I had a nickel for every time my mom called me “greedy” as a kid, I would be rich! There was this running joke in my family about me having tape worms because my stomach seemed bottomless. There was this period in high school when I’d regularly buy 2 of those 12 pack boxes of Oatmeal Crème Pies on a Friday and finish them all by Sunday night. Life was stressful growing up and I didn’t always have access to the same outlets that I do now or the understanding of how to mitigate stress in the first place. So to treat stress, I gravitated to something that was usually available in some form or another and I’ve learned that’s what most other people do as well. This realization completely changed the way I see people who are overweight or battling any other kind of addiction. Life is confusing and ofter very painful so we all develop bad habits to help cope with the lows of our existence. Confronting my bad habits not only made me more compassionate for my fellow addicts but it also made me a better person in general because by facing them, I’ve been able to work towards getting passed some of them and gaining more control over my life, my emotions, and my time.

Feelings of pleasure are controlled by chemical processes in the mind. There are only four things that anyone ever enjoys and those four things are Dopamine, Serotonin, Endorphins, and Oxytocin. Every pleasure that you enjoy, be it writing, creating art, bike riding, skiing, teasing others, social media engagement, watching tv, playing video games, being tied up and spanked — all of these experiences produce one or more of the four chemicals mentioned above which in turn makes you feel good, important, or fulfilled temporarily. Because life is inherently chaotic and because no one likes to be stressed, we’ve all developed habits that we return to again and again because we know that they will produce these feel good hormones. Of course, this sounds harmless at first but too much of any good thing will become a bad thing. The real danger comes because a lot of us aren’t aware of the things that we’re addicted to or we assume that the addiction is something that we’re supposed to be doing naturally. For instance, I was addicted to not only having sex but the entire process leading up to getting to that point. I was addicted to the thrill of the chase, the dialogues, the manipulation, the entire game of it. Believe it or not, I was also addicted to the fallout the resulted in me ultimately getting bored because the other person’s attachment to me made me feel important or significant. For a long time, I couldn’t see how what I was doing was wrong because in my mind, it was what men were supposed to be doing. It gave me a sense of purpose, something that I think we all are constantly looking for, and that made it even harder to face. I kid you not when I say that I used to think that I’d never be able to stop having sex with women I didn’t have feelings for. It literally didn’t feel possible but that just speaks to how strong addiction is. And that’s exactly why I shouldn’t judge anyone for overeating or for using drugs or for doing any of the other things that we view as self-destructive. I’m no different from a heroin addict or someone who weighs 600lbs — the only real difference is that my addictions often don’t manifest physically and even whey they do, I can enjoy them in private without the prying eyes of society judging me for it. A privilege that some other addicts unfortunately can’t enjoy.

When you think of the word “addict” your mind probably immediately goes to an image of a strung out drug user. This is because it’s human nature to project the things we don’t like about ourselves on to other people. Deep down we all know that we’re addicted to something and I think that we use drug users as a scapegoat to not have to face our own truth. Did you know that sugar is believed to be more addictive than cocaine? Did you also know that 80% of all processed food has sugar in it? Did you know that you’re probably addicted to sugar right now? Don’t think so? Well, I challenge you to go a week without consuming any of it starting right now! I used to be so judgmental towards my father because to me it appeared like he was an alcoholic. Most, if not all, of my memories of him involve him having beer on his breath. I associated alcohol with how he treated me and it was so traumatic for me that for a long time, I said I would never drink. I had access to alcohol since I was 17 but I didn’t have my first drink until I was almost 21. Not because I had experience with alcohol and how it affected me personally but because of assumptions I made due to what I observed in my father’s behavior and the behavior of others that drank. But the entire time that I judged my father for his drinking habit, I never stopped to wonder why he had it in the first place. I’d never asked him if he was stressed out or depressed or dissatisfied with life. I never asked him how his childhood was or how his parents treated him growing up. I never asked him if he was broken hearted or confused and used the drink to cope with the feelings that he was having. I never asked him why he drank so much. I just assumed that I knew. I assumed that he was just no good and weak and not a human being with feelings and emotions just like me. It really wasn’t until I got knee deep in my own shit and I started using substances for relief myself that I started to wonder about what pain he might have experienced. The truth is, people don’t just become addicted to things out of nowhere. Addiction is an effect, not a cause, and too often we judge people for the effect of what’s happened to them instead of attempting to understand the cause of it.

I love pleasure. It’s one of my most favorite things about life. Most of my days are planned around how to get as much pleasure as possible while avoiding as much pain as possible. If I had my way, I’d be pleasured from the time I open my eyes in the morning until the time I close them at night and then I’d be pleasured some more in my dreams. But the problem with pleasure is that it is fleeting and it’s the fleeting nature of pleasure that turns us into addicts. I’m a big advocate for orgasms — I think they are so powerfully healing and it’s no secret that they induce an incredible endorphin rush. But that endorphin rush doesn’t last very long and that’s why some of us feel the need to masturbate every day. It’s also why it’s easy to objectify and manipulate others into having sex with us. It’s stress relief at it’s finest but even the highest of orgasms will always wear off eventually which means you’ll do whatever you need to do in order to make it happen again. And so a habit is birthed and what are we other than the things we do all the time? Sometimes our habits become so powerful that we disregard other things in our lives to make sure that our habits are fulfilled and that’s where the danger really comes into play. When our addiction to food or drugs causes us to disregard our health and what’s being done to the planet. When our addiction to sex causes us to disregard the feelings and emotions of others. When our addiction to being the victim causes us to disregard the power we have over ourselves. When our addiction to independence causes our family and friends to feel like we don’t care about them. When our addiction to information causes us to disregard our mental well-being. We’ve all been guilty of being controlled by some form of addiction or another at some point in our lives and that’s why we shouldn’t judge anybody for what they’re doing. No matter how destructive it appears to us, we must instead be compassionate and empathetic and see ourselves inside the people we point the finger at. The truth, whether you want to hear it or not, is that we’re all a lot more alike than different and that what you don’t like about others is usually a reflection of what you don’t like about yourself.